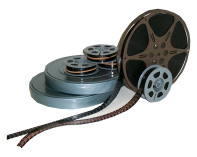 Back in the late 40's and early 50's, Eastman-Kodak created the 8mm movie film format for the North American post-war baby-boom and what an explosion it was! After the film was exposed it was quickly boxed up and mailed to Kodak for processing. A few weeks later, the film would arrive and the family got together, set up the projector and laughed at all the crazy performances and family past moments and for extra fun, the projector could play in reverse; nobody could resist a good laugh!

Times have changed, the projector stopped working; the bulb’s probably burnt out and irreplaceable.

For more information about Movie Film

We strongly recommend that the film reels are numbered in chronological order if possible so they are embedded on the DVD in correct sequence.

Get Social with Us

Recommend this page on:

Find us on google+